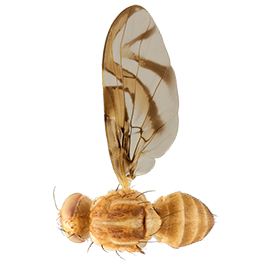 This species is in the fraterculus-group.

Note that A. fraterculus has been recognised to be composed of at least eight different species based on multi-disciplinary evidence including morphometrics and mating compatibility studies (see relevant studies in Zookeys Special Issue Vol. 540, 2015). These species are yet to be formally described hence any intercepted flies identified as putative A. fraterculus should be regarded as such until either examined by an expert and/or their taxonomic revision is complete.

BOLD reference data available, but cannot be distinguished from A. distincta, A. ludens, A. obliqua, or A. suspensa.

No individual restriction enzymes are diagnostic, but a selection will differentiate A. fraterculus from other Anastrepha and from species within other genera

Note that this geographic distribution will be revised pending the description of cryptic species within A. fraterculus sensu stricto. Anastrepha fraterculus may be readily confused with other members of the fraterculus-group; especially A. obliqua and A. suspensa.

One of the most important distinguishing features between A. fraterculus and A. obliqua is the nature of the aculeus tip, which has serrations only on its apical third in A. fraterculus in contrast to that of A. obliqua.

Other differences between A. fraterculus and A. obliqua are:

Regarding A. fraterculus versus A. suspensa, the apical arm of the S-band of A. fraterculus is narrow compared with that of A. suspensa. There is frequently a distinct scuto-scutellar black spot, but it is usually smaller than in A. suspensa (Foote et al. 1993).

A. fraterculus is believed to belong to a group of closely related sibling species which, to date, have not been identified and described. In addition, it is very close to A. obliqua and A. suspensa. Consequently, A. fraterculus is difficult to diagnose and its exact area of distribution uncertain.

A. fraterculus is the most economically important species of genus Anastrepha in South America (Foote et al. 1993).

No known record, but can be captured using McPhail traps with decaying protein (or similar), or with multilure traps with ammonium acetate + putrecine.