Fruit flies can be detected using male lures in traps such as cue-lure and methyl eugenol. These lures are highly attractive and can lure flies from several hundred metres to a couple of kilometres.

Cue-lure, methyl eugenol and capilure traps are widely deployed across Australia as part of state and federal biosecurity and market access monitoring programs. Some hardware stores may also sell ‘Queensland fruit fly traps’ that contain cue-lure. However, not all species respond to these male lures and their detection requires alternate methods such as protein or orange ammonia lure trapping or rearing infested fruit.

Where known, specific lures are provided for each species in the Find a species pages and in the Australian Handbook for the Identification of Fruit Flies.

Traps are designed to lure flies into a container with an attractant, kill them with an insecticide or by drowning in a liquid and retaining the dead flies in the trap body.

Traps should be hung by wire or string in shady fruiting trees or in shady trees near fruit trees or vegetables. Traps should not touch foliage as ants use foliage as a bridge to enter the trap and remove dead flies.

Foliage and twigs in the immediate area of the trap should be checked and pruned regularly.

Spiders may also set up residence in or on traps and remove dead flies.

It may be necessary to apply sticky coating such as Tanglefoot to the wire or string on which the trap is suspended to prevent fly predation from ants.

Lynfield, Steiner and Paton traps are used with male attractants (cue-lure, methyl eugenol (ME) or capilure). They have a cotton dental wick impregnated with a lure and insecticide (toxicant) hung inside the trap body. The cotton dental wicks are inexpensive, provide absorption of the attractant and insecticide mix and allow ready volatilisation of the lure over relatively long periods. These traps have small holes in the bottom for drainage.

Cone traps are new dry traps that normally are used with a male lure sachet. Usually information labels are placed on the outside of the trap body (poison, lure type and contact information).

Lynfield trap
The Lynfield trap is an inexpensive bucket trap that consists of a clear plastic container of about one litre volume (approx. 85-100 mm wide by 100-115 mm tall) with four entry holes 25 mm in diameter evenly spaced 15 mm below the lip of the trap. These holes allow the lure vapour to leave the trap and flies to enter the trap (Cowley et al. 1990). This trap type is used in eastern Australia in areas of lower rainfall north to Townsville. Steiner trap
The Steiner trap is an open horizontal plastic cylinder of approximately one litre volume. It has openings at each end of the trap for entry of flies and to allow free movement of the attractant vapour from the cotton wick.

The modified Steiner trap has ingress tubes to prevent rain getting in and flies escaping, with mesh halfway across the entry to prevent dead flies falling out.

Steiner traps are used in areas of high rainfall such as far north Queensland north of Townsville. Paton trap
The Paton trap is used in areas of very high rainfall or wind or where traps may be set for longer periods (e.g. a month) between collections. They are used in parts of Cairns, Cape York Peninsula and the Torres Strait Islands in Queensland. They are very rain resistant, prevent flies falling out in windy situations and are able to hold up to 20,000 flies (where the Steiner trap can only hold about 6,000). They are often used with cardboard spacers to maintain the samples in good condition. 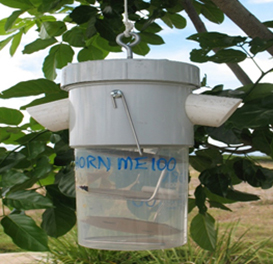 Cone trap
The Cone trap was recently developed in Spain by Probodelt. Although it is not as sturdy as Lynfield, Steiner and Paton traps, it has the advantage of being a flat pack trap that is compact for travelling or shipping and assembly in the field. It has short tube ingress holes (similar to Steiners and Patons) rather than plain holes as found in Lynfield traps. The base of the cone trap is yellow which may be attractive to some species.

Cone traps have a trap door in the bottom for removal of dead flies. The disadvantage of this trap is that great care is needed when removing flies from the bottom as they are prone to flicking out. A container should be held around the trapdoor at the bottom to collect flies into with the potential for flicking flies anticipated. 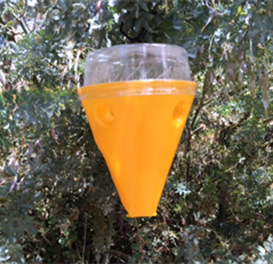 McPhail trap
The McPhail trap is a plastic flask-shaped container with an invaginated entrance at the base. It is used with liquid lures, such as orange ammonia or liquid protein, which attract and kill both males and females by drowning them.

McPhail traps used with protein, orange ammonia or host volatiles are much less attractive than male lure traps but are useful for trapping species that do not respond to male lures. They need to be cleared regularly to avoid deterioration of the specimens and attractant liquids (except propylene glycol) need to be replaced at least weekly. These traps can be more messy and time-consuming to service.

McPhail traps can also be used with male lures suspended from the lid and a propylene glycol solution for drowning flies. This method can be used for collecting specimens for DNA studies as propylene glycol (as low as a 40% solution) is a good DNA preservative (Blacket unpublished data 2018).

In north Queensland these traps have been set for seven months without recharging the liquid with no apparent loss in attractiveness (Royer 2013 unpublished data). 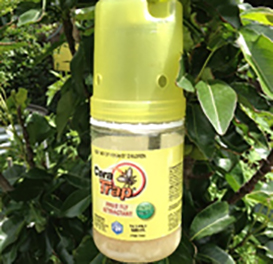 Cone trap
See above for cone traps. These can also be used with an Amphos-Dacus protein sachet. These are useful for collecting non-responsive species or both sexes in good condition.

Bio trap
Bio Traps are similar to McPhail traps in having an invaginated yellow base and clear top but with more ports to allow release of lure vapours. These can be used with Bio Trap protein gel and a 1cm square dichlorvos strip as a toxicant.

These traps are also cleaner and easier to use than wet traps and are also useful for collecting non-responsive species or both sexes in good condition.

Jackson trap
The Jackson trap or delta trap is a triangular trap made from cardboard or plastic used with a sticky base insert. Sticky bases are removed, covered with cling film and flies identified either on the base or removed with a glue dissolver (e.g. Orange Power).

These traps are very messy to use. The sticky bases can cause problems in transport and when trying to remove flies for identification and are therefore not ideal when good quality specimens are required. They can however be useful in monitoring populations of a single species, or when wishing to use lures without a toxicant.

The Jackson trap was demonstrated to be more effective than other trap designs in the 1980s (O’Loughlin et al. 1983) probably due to the wide entrance allowing greater lure airflow.